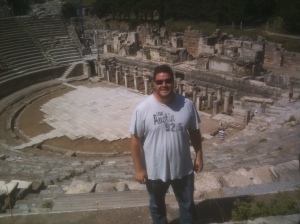 In May 2011, I toured the “Seven Churches of Revelation (Revelation Chapter 2-3)” that are all located in modern-day Turkey with Upstream Collective.

Of all the ruins we visited, Ephesus was the highlight of the historical tour.  As we walked the marble streets, you could truly imagine what this ancient city was like.  In the days of Paul, the city had 150,000 residents and up to 15 percent of the ruins have been recovered, making it a true historical treasure.  The picture here is of me at the amphitheater that seated 20,000 people!

As a young pastor I have drawn strength from Paul’s instructions to another young pastor named Timothy, who lead a congregation in Ephesus.  As I walked the city, I imagined the people Timothy was leading in that pagan environment, and I felt a similar challenge today.

Caleb Crider is the co-founder of Upstream Collective, and he adds some great thoughts from his experiences in Ephesus that I would love for you to read:

Anyone who’s ever visited any site of religious or historical significance knows to expect trinkets, tchotchkes, and $4 bottles of water. Ephesus, outside the modern Turkish city of Selçuk was no different. As we approached the entrance to the ruins of the ancient city, one vendor called out in English: “Two tourists died yesterday of heat exhaustion! Buy this hat to avoid the same fate!” This is marketing. 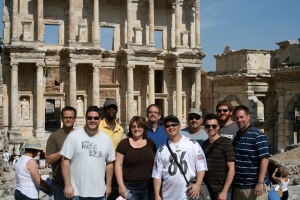 As we explored what’s left of the streets of Ephesus, we saw temples built to various gods and emperors. We passed the remnants of workshops, libraries, brothels, and public baths; the context of the Apostle Paul’s rebuke of the city’s idolatry (Acts 19). Our small group of pastors and church leaders recognized them as the very same challenges we face in ministry today.

As called-out ones living in societies that celebrate idolatry, materialism, human knowledge, and sexual sin, how do we engage? Have we, like the Ephesian church warned by Jesus in Revelation, hunkered down in defensive perseverance?

Our tour included a remarkably well-preserved Ephesian housing complex. This sprawling maze of living quarters, work spaces, and dining halls would have been host to gatherings of early Christ-followers before the times of large church buildings. As we explored, we felt a real sense of the history of it all; our history as believers trying to sort out what it means to live out our faith in the context of the cultures in which we find ourselves.

The highlight of our stop in Ephesus wasn’t among the ruins of the old city. It was the time spent drinking coffee in the St. John Cafe in Selçuk. There, we visited with the owner, who is one of maybe three-thousand Turkish Jesus-followers. We were encouraged by his journey of faith and his fearlessness in the face of persecution.

In the face of idolatry and opposition, may our churches be relentless in the pursuit of our first love, Christ Jesus.