John 10:22-23 – Then came the Feast of Dedication at Jerusalem. It was winter, and Jesus was in the temple area walking in Solomon’s Colonnade. 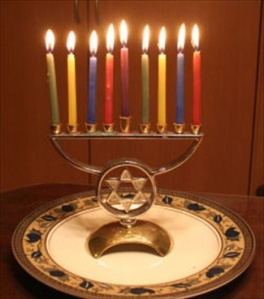 The story of Hanukkah is recorded in the First Book of Maccabees, which is part of the Apocrypha. In the year 165 BC, the Jewish people who lived in Judea where living under the rule of the Greek kings of Damascus.

During this time Syrian King Antiochus Epiphanes, took control of the Temple in Jerusalem. He forced the Jewish people to abandon their worship of God, made them bow down to the Greek gods and sacrificed a pig on the altar. As a result of the severe persecution, a group of four Jewish brothers, led by Judah Maccabee, decided to raise up an army of religious freedom fighters. These men became known as the Maccabees.

The small band of warriors fought for three years with “strength from heaven” until achieving a victory and deliverance from the Syrian control.  After regaining the Temple, it was cleansed by the Maccabees, cleared of all Greek idolatry, and readied for rededicated.   So Hanukkah received its name, the Feast of Dedication, because it celebrates the Maccabees’ victory over Greek oppression and the “rededication” of the temple.

But Hanukkah is also known as the Festival of Lights, and this is because immediately following the miraculous deliverance, Jewish tradition states that God provided another miracle of provision. In the Temple, the eternal flame of God was to be lit at all time as a symbol of God’s presence. But according to tradition, when the Temple was rededicated, there was only enough oil left in the temple to burn the flame for one day. The rest of the oil had been defiled by the Greeks during their invasion, and it would take a week for new oil to be processed and purified. But at the rededication, the Maccabees went ahead and lit the eternal flame with the remaining supply of oil, and God caused it to burn miraculously for eight days, until the new sacred oil was ready. This is why the feast is also called the Festival of Lights, and why the Hanukkah Menorah is lit for eight consecutive nights of celebration.