The current world series between the Kansas City Royals and New York Mets reminded me of this story. When I went to school in KC, a friend of mine at a Royals home game met a Yankees player’s wife. In conversation she said “we like to come to Kansas City when we want to get out of the city.” 🙂 Even so, go Royals!

March means college basketball, and I’ve watched a lot of basketball over the years.   Since my earliest memories only go back to about 1980, here are the best college teams I remember watching (the year is the “spring date” of the season):

1)  1992 Duke Blue Devils:  Christian Laetner, Grant Hill, Thomas Hill, Bobby Hurley – this team was a TEAM.  They defended their ’91 title when the whole world wanted to beat them.

4) 1990 UNLV Runnin’ Rebels:  It was hard to see Dallas native Larry Johnson play outside of Texas, but the pure talent on this team may be unmatched by any other team.

5)  2009 North Carolina Tar Heels:   In the era of “one and done,”  Roy Williams assembled a team that never was really challenged in the NCAA tournament.

6)  1994 Arkansas Razorbacks:  A solid team led by Corliss Williamson, and cheered on by President Clinton.   This was a fun era for the state of Arkansas.

7)  2007 Florida Gators:  The most under-appreciated back-t0-back champions in NCAA history. 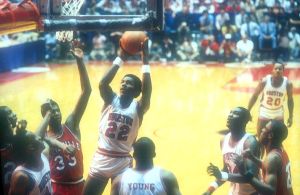 9)  1983 Houston Cougars:  The only team on my list that didn’t win it all.  Akeem Olajuwon and Clyde Drexler led  a team that should have never lost to NC State.  However, the dominance of the Cougars made the NC States upset win more meaningful.

10) 2008 Kansas Jayhawks:  This team could run, as they upheld the KU tradition of winning with Coach Bill Self’s first championships.

in no particular order:

Derek Redmon’s father carrying him across the finish line in 1992 after an injury.  S0 touching.

Dominance in sprinting by Michael Johnson in 1996.  This fellow Texan made his hometown of Dallas proud! 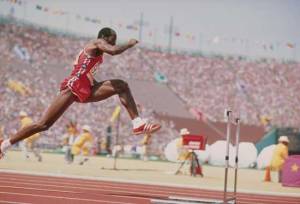 The 1984 Men’s Gymnastic team gold medal.  A few weeks later I met the team members when they toured the Irving Mall (Irving, TX).

The 1984 basketball team, which was the last college team to win a gold in basketball, before the pros started competing.  My favorite player at the time, John Koncak of SMU, was on that team.  A young guy named Michael Jordan was pretty good, too (you may have heard of him).

By far, the 1984 Olympics in Los Angelas made the most impression to me.  I was nine years old, and had never seen the Olympics (the US boycotted the 1980 games in Moscow).   It’s fun 28 years later seeing my 8  and 10 year old boys discover the Olympics.

Tommorrow night begins the College Football season.   Instead of boring you with the same top 5 list everyone has for the 2009 college football season (i.e. 1. Florida 2. Texas 3. Oklahoma), I want to give some less obvious predictions:

– Tennessee’s quarterback Jonathan Crompton will have an all-conference season.

– Someone besides Ohio St or Penn St. will win the Big Ten.   Look for Iowa or Illinois to surprise that conference.

– Vanderbilt will scare LSU to death in Death Valley on September 12th.  I can’t predict a win, but it very will could be.

– Oklahoma State will beat either Texas or Oklahoma.  The Cowboys are really good.

– Baylor will beat Texas A&M and Texas Tech, and return to a bowl for the first time in years.  Go Baptist! I mean Bears!

– Kentucky will take a step back, but Rich Brooks is still a great coach.

– This will be the last year Gary Patterson will coach TCU – my childhood team.   TCU will have another strong season, and some major conference, state school would be silly not to hire him away from Ft. Worth.